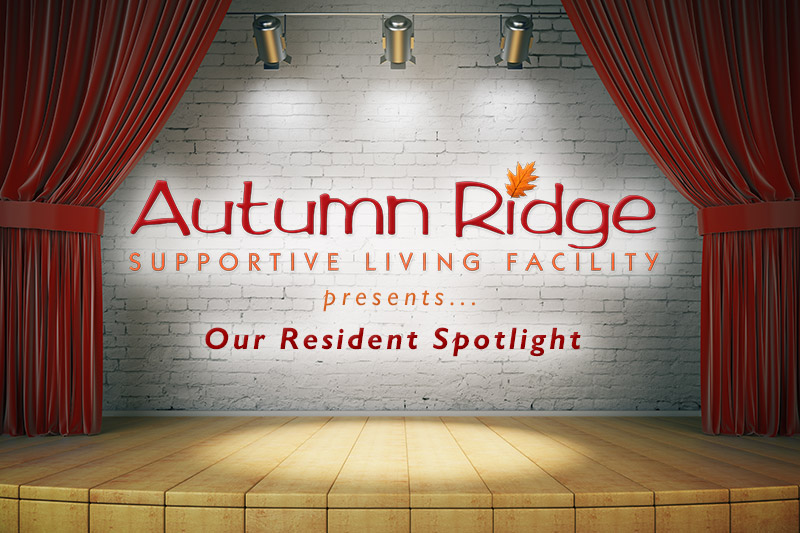 Learn about the wonderful people who call Autumn Ridge home…

Meet James “Dillard” Alsip, our newest resident at Autumn Ridge Supportive Living. Dillard was born and raised In Vienna. The only time he left our area was to pursue his career in construction, which is the field he worked in for 43 years. He found his time in construction very rewarding as he has always enjoyed working with his hands. Dillard is proud of his hometown and has many friends that still live in the area. Read more >>

Dolores Boyd is a longtime resident of Autumn Ridge, 9 years to be exact. She is the president of our resident council and is active in the social scene at Autumn Ridge. Dolores is responsible for planning and leading a weekly craft class where she instructs fellow residents in crochet skills and other yarn crafts. She is very devoted to life at Autumn Ridge and is always a welcome face to newcomers. Read more >>

Let us introduce you to Pat Calvin. Pat has lived at Autumn Ridge for almost a year. She grew up in Mounds City which is in the very southern part of Illinois. After graduating high school, Pat and her sister both began working for the local telephone company. Pat met James, who later became her husband in September of 1958; they moved to Mounds which is where they made their home. Read more >>

Truman Latham was born and raised in Metropolis; however, he has lived all around Southern Illinois. Truman also spent some time in Chicago where he worked at a steel plant. Truman went to school at Metropolis grade school where he left school after the eighth grade to help his father in his business ventures. Read more >>

Garnelle Trover is a 4-year resident of Autumn Ridge Supportive Living. During her time at Autumn Ridge she has enjoyed participating in many activities and listening to a wide variety of musical groups. Garnelle is a long time resident of Johnson County, being born and raised in “the big city of Ozark.” Garnelle reminisced about many memories over the years right here in Johnson County. Read more >>

Peggy Watts has lived at Autumn Ridge for almost three years. Most of Peggy’s life she lived in Massac County. Early on her father owned a grocery store in Brookport where she attended school. After her father got out of the grocery business, her parents and grandparents swapped houses. This move then put her family in the rural part of the county causing her to switch from Brookport Grade School to Unity Grade School. The house swap enabled her father to run the family farm. Read more >>

Shirley Wolfe has been a resident of Autumn Ridge for over a year, but she is a long time fixture of Southern Illinois. Shirley was born in Reevesville, but her father’s ministerial career brought her and her family to Brookport, Cypress, Karnak and other small towns in the area. She graduated from Vienna High school and considers Vienna to be her home. Shirley grew up with her older sister who she remains very close with today. Read more >>

Mary Wood and Patricia Bingaman have been life long friends. Both have recently moved to Autumn Ridge where they have continued to grow their friendship. Mary and Pat are originally from Ullin, Illinois, but have lived in multiple places through the years. However they always seem to find their way back to each other. Read more >>

Bill Worrell was born and raised in Vienna and has been a resident of Autumn Ridge for nearly five years. Bill spoke of his family life growing up. He said his parents were both teachers in Southern Illinois and his father even taught his mother in school. Read more >>