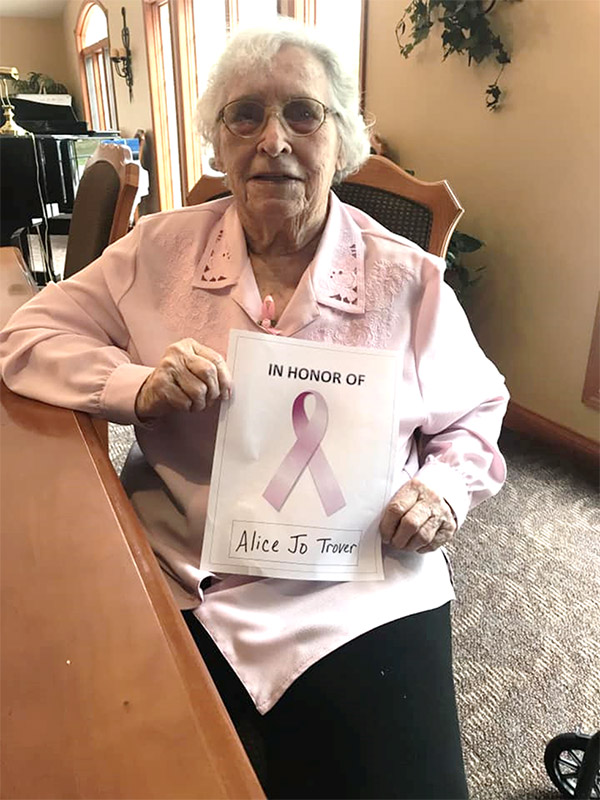 Garnelle Trover is a 4 year resident of Autumn Ridge Supportive Living. During her time at Autumn Ridge she has enjoyed participating in many activities and listening to a wide variety of musical groups. Garnelle is a long time resident of Johnson County, being born and raised in “the big city of Ozark.” Garnelle reminisced about many memories over the years right here in Johnson County.

She thought back to the days where she was a young girl frequently visiting the local grocery store where she remembers spending time with her friends. She says, “It was the new thing to do, so that’s where we went.” She also told of the times she had with her best friend, Wilma, and the adventures they went on as kids, and also spending time with Wilma’s twin brother Buddy. She didn’t know it then but that friendship would spark a romance, and in 1940, Garnelle and Buddy were married—a marriage that would last 75 years.

Garnelle and Buddy worked together selling produce to local stores as well as big chain stores in St. Louis. She spoke fondly of her time with Buddy and the trips they took to sell produce. She says, “Buddy was the one that would talk to everyone, he would just walk right in the front of the store and throw a 20 lb. box of tomatoes on the table.” Some of the best times Garnelle remembers were when she and Buddy would visit nursing homes in Kentucky and Illinois with their beloved dogs Sassy, Bear, and Rolly as part of their mission work. She shared many stories of the people she encountered and how they would light up when they came to visit. When Buddy passed, her good friend Lloyd Holder continued the work with Rolly.

Garnelle is most proud of her family and the close bond they have. She and Buddy have 3 sons and 1 daughter together. From her children, she has 12 grandchildren and 18 great grandchildren. Her family remains an active part of her life, making frequent trips to Autumn Ridge and attending family night gatherings regularly. Garnelle has thoroughly enjoys the time she has spent at Autumn Ridge where she has made many friends which have grown to become part of her family. She says, “I like living at Autumn Ridge because I can still have my own space and stay active.”